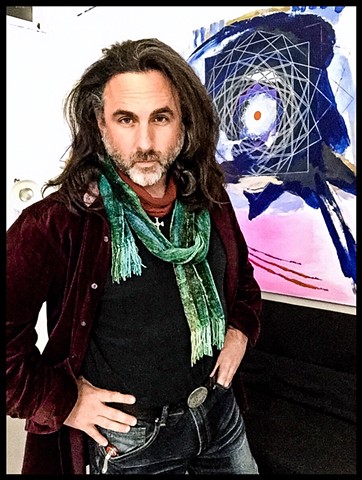 Justyn Michael Zolli is an American Visual Artist, an art restorer, a museum professional, and a scholar of art history and aesthetics. He is currently based in Northern California.

Zolli’s art career and studio praxis is centered on the intersection of the visual arts, spirituality, and aesthetic experience as a path to understanding beauty and enlightenment. His work in the Arts ranges across painting, drawing, printmaking, painted murals, architectural stained-glass, and published books of photography; related projects include lectures, workshop teaching, and restoration projects of religious art.

He completed his Art Foundation studies at Rhode Island School of Design, Providence RI, and also studied anatomical figure Drawing at Massachusetts College of Art, Boston. He was next accepted into a joint program with The School of the Museum of Fine Arts, Boston and Tufts University, completing his BFA degree in 1998. Here he studied painting under international Professors Miroslav Antic (Yugoslavia) and Sensei Kaji Aso (Japan). His coursework included philosophy, comparative mythology, art history, painting, printmaking, and photography. Upon graduation he was awarded the Will Barnet Award in Painting.

In 2014, Justyn traveled extensively throughout India, and while there undertook independent studies with the renowned artist and academic, Professor Om Prakash Sharma (1932 - 2019), one of India's greatest abstract painters and retired president of the National College of Art in Delhi. More recently, in 2020 Justyn was accepted to study at the Dominican School of Philosophy & Theology, Berkeley, where he is presently working towards an M.A. degree in Aesthetics in the Art & Religion Dept. In 2021 he was awarded a prestigious Civitas Dei Fellowship by the Thomistic Institute, Catholic University of America, Washington DC.

He has also hiked and explored a large number of remote wildernesses and national parks throughout the North American west, later publishing many books of his landscape photography created from these treks.

Additionally, Justyn has held professional appointments as an Exhibition Preparator, Mountmaker, and artist in eminent museums of Fine Art and History, working with priceless collections of valuable artworks and historic artifacts. These institutions have included: the Anderson Collection Museum of American Art at Stanford University, the Oakland Museum of California, the Fine Arts Museums of San Francisco, The Jack London Museum, the SFO Aviation Museum, and the National Park Service (US Dept. of the Interior). Prior to his employment in museums, Justyn completed an apprenticeship in the traditional craft of stained-glass at the historic Burnham & LaRoche Studio, and was employed as an art conservator and glass-painter of historic stained-glass windows. In this capacity, he has primarily worked on major stained-glass restoration projects for churches, libraries, cathedrals and religious architecture throughout New England, New York, and California.

Presently, he maintains a large art studio in the Benicia Arsenal Arts District in Benicia, CA. He is represented by Gallery Sam, based in Oakland California, who exhibit his paintings in contemporary art fairs in cities nationwide.